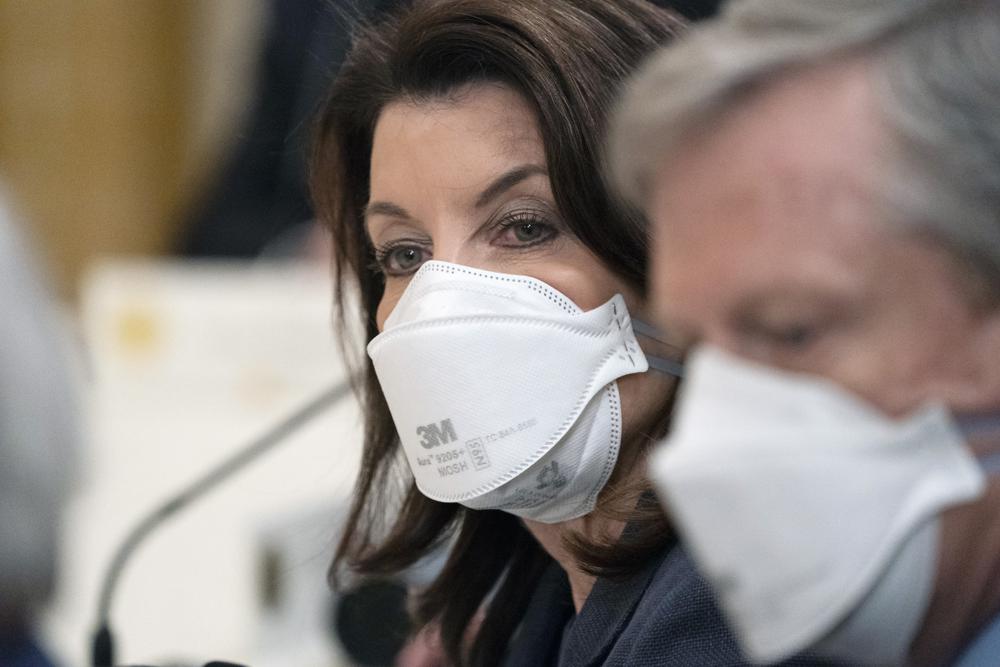 Gov. Kathy Hochul, D-N.Y., listens as President Joe Biden speaks during a meeting with the National Governors Association in the East Room of the White House, Monday, Jan. 31, 2022, in Washington. (AP Photo/Alex Brandon)

The mandate requiring face coverings in most indoor public settings, like grocery stores, shops and offices, was put in place Dec. 10 as the omicron variant of the virus began infecting huge numbers of New Yorkers. It was set to expire Thursday unless the Democrat’s administration extended it.

Speaking from her office in New York City, Hochul said infection rates have since declined to a level where it is safe to rescind the broad masking order.

“This fight is not over, we’re not surrendering. This is not disarmament,” she added, “but again the trends are very, very positive.”

Hochul had been hinting for several days that she would let the mandate lapse as infection rates have fallen.

Can you get long COVID after an infection with omicron?

Hospitals begin to limp out of the latest COVID-19 surge

Masks, though, will still be required in some places, including in health care facilities, certain types of shelters and public transit. Private businesses will also be free to set their own masking rules for staff and patrons.

Hochul said the state will revisit the question of whether to continue requiring masks in schools the first week in March, after many children return to classrooms following planned winter breaks in late February.

She said millions of COVID-19 tests would be distributed to schoolchildren, with the intent that kids get tested after the break. Data from those tests will help inform the state’s next steps.

“After the break, after we have kids tested, we’re going to make an assessment in the first week of March,” Hochul said.

Hochul had previously said she would like to see vaccination rates for children improve before she does away with that statewide mandate, which has been in place since August.

New York’s broader masking rule was put in place as omicron cases began to soar. It was initially set to expire weeks ago, but had been extended twice while state officials waited for the wave to subside.

There was an exception for people who can’t medically tolerate a face covering or mask. Public places or workplaces that required vaccination as a condition of entry were also exempt.

Hochul met Tuesday with school administrators and teacher unions to talk about when and how the state might ease the school masking mandate.

About 5,000 COVID-19 patients were hospitalized in hospitals statewide as of Monday. That’s below a peak of nearly 12,700 on Jan. 11, but still double the amount of patients hospitalized Nov. 21.

Massive asteroid 2022 ,larger than the pyramids heads closest to Earth this week

Tom Brady retiring from NFL after 22 seasons | If Tom...

Massive asteroid 2022 ,larger than the pyramids heads closest to Earth...